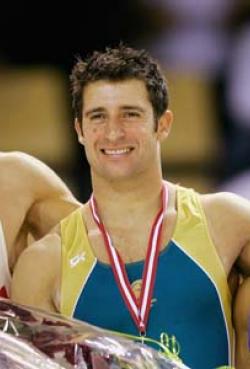 Phillipe Rizzo was the first Australian gymnast to win gold at a World Championship Level. He truly is an iconic sportsperson when it comes to gymnastics in Australia, and The Gym Spot wants to shed light on his achievements throughout his career.

Rizzo has been involved with gymnastics his whole life. His parents were the founders of the Australian Academy of Gymnastics, which still exists to this very day, and is where he spent the majority of his time as a young boy.

Two of Rizzo’s biggest achievements to date was having the opportunity to perform at the 2000 Sydney Olympic games,  where he performed in the All- Round Final in front of his family and friends.

He also was titled the winner of the High Bar final in 2006, which contributed to the Australian Gymnastics Team winning their first World Championship Gold Medal.

Currently, whilst Rizzo’s professional gymnast career is over, he is still very much involved in the sport. He currently is a coaching consultant at Gymnastics Australia, where he focuses primarily on workshops and camps. He also is a qualified MAG judge, and judge at both State- and National- level competitions. He was also appointed to the MAG Commission from the year 2018 for his achievements and passion for the sport.

Who else do you want to see on our From The Vault segment? Let us know in the comments below!

0 comments on “From The Vault: Phillippe Rizzo”